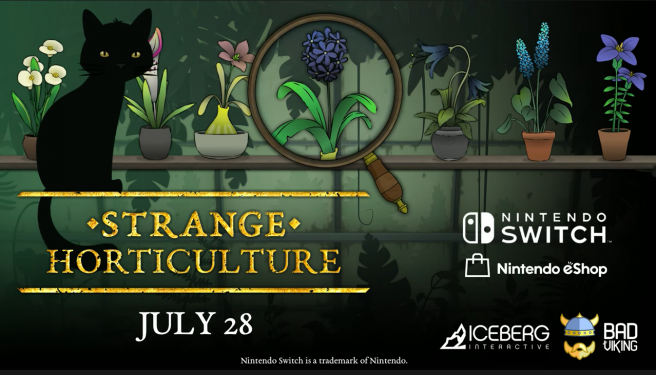 Publisher Iceberg Interactive and developer Bad Viking have announced that Strange Horticulture will release on Switch eShop later this month on July 28. The game is an occult puzzle game based around collecting and cataloging a variety of strange and powerful plants, as players explore the game land of Undermere. The game also released on Steam earlier this year.

Here is a preview and trailer of the game:

WELCOME TO UNDERMERE
Welcome to Undermere, a picturesque town surrounded by witch-infested forests and rugged mountains. You are the horticulturist, owner of the local plant store Strange Horticulture. As a colorful group of shoppers pass by your store, you are quickly drawn into an occult mystery dating back hundreds of years.

THE LANDS BEYOND
Explore the lands beyond your store to find new plants, but be careful! Dark woods and lakes are not always welcoming to a simple herbalist. You could discover powers beyond your wildest dreams – or lose your mind altogether. Use context clues to determine which places to visit and which to avoid!

AN EVER GROWING COLLECTION
With the help of your trusty encyclopedia and clues found during your explorations, you will learn more about the strange plants you will encounter. By identifying each plant, you can use their effects to influence the story – from hypnotic hallucinogens to powerful poisons.

Strange Horticulture will release on Switch digitally via the eShop on July 28.

Take a classic puzzle game, turn it into a massively multiplayer online tournament, add NFTs steeped in intrinsic value, then put it all on a DeFi framework and you have a product that is both addictive and lucrative. Blockchain-based alchemy toys is loosely based on PopCap’s Alchemy video game, which is all about taking two […]